Stories from Parents and Carers 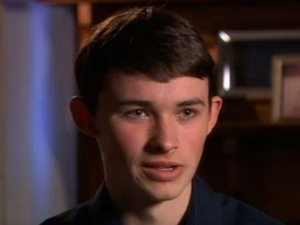 ‘I AM JACK’ – Click here to watch ABC Australian Story.

An ABC ‘Mental As’ special presentation

This Monday, we find out what’s been happening in the lives of a family who featured in one of our most popular programs.

It’s the story of radio and TV personality Ian ‘Dano’ Rogerson and his wife Nicole, who gave up their home, successful careers and an exciting lifestyle for the love of their son, Jack.

Diagnosed with autism as a toddler, Jack Rogerson was hyperactive, could barely speak and was unable to express ordinary affection. They were determined to do whatever it took to enable their son to lead a mainstream lifestyle.

Five years on, the family’s determination is being richly rewarded.

At 18, Jack has recently graduated from a mainstream high school and is looking forward to a career in the hospitality industry…

Like most first time expectant fathers, the thought of an impending new arrival brought with it the normal excitement and fears associated with such an important and special occasion. My wife, Shauna, and I spent countless hours preparing by attending birthing classes, renovating our new nursery and even arranging for her best friend to share with us the experience of the birth. At the time, these seemed important issues but in retrospect, they paled into insignificance compared with what was to come.

The great day arrived and the nursing staff regarded the birth as pretty regulation. Our doctor performed the post birth examination and declared our son fit and well. As a proud new father, my thoughts quickly raced forward to the day when my son would wear the baggy green cap, or the famous number five Essendon guernsey. So excited was I, that I even suggested to Shauna that our son should have the same initials as my father, and she readily agreed. I am not sure whether this was because she shared my view on peerage or because she was still under the influence of large doses of pethidine. We took our new son home, and all seemed well.

For the first few months, things moved steadily between mother and son, but occasionally, Shauna noticed things that did not seem quite right. As Rhys was our first child we had no way of comparing him with other children. Shauna had the normal banter with other mums, relatives and health professionals who all assured her that Rhys’ inattentiveness and avoidance of eye contact would soon change and not to worry. Despite all this wellmeaning encouragement, Shauna’s intuition told her that all was not right.

Sure enough, at the age of about four Rhys was diagnosed with Pervasive Development Disorder – ‘not otherwise specified’ (work that out if you can!). As big a shock as it was, it was slightly softened by the fact that we had suspected for some time that all was not well with Rhys.

Notwithstanding our suspicions, the reality of a formal diagnosis immediately turned our world upside down. Our initial feelings were the normal ‘why us’ and ‘could we have done something to prevent this?’. Our paediatrician explained that these things just happen and nothing could have been done to prevent it. It was nobody’s fault. On learning of Rhys’ condition, many of our friends and acquaintances attempted to console us by saying ‘only special parents have children with special needs’ a phrase which we have grown tired of from that day to this.

As reality set in, it was up to us to work through the maze of health professionals, government departments, child care and school facility issues that all had to be addressed. However, before we could take that step, we had to get over what I consider to be the biggest hurdle, and that was one of acceptance.

Shauna has on many occasions castigated me for moping around and sulking over the most trivial of issues. Her blunt and terse reply is to ‘build a bridge and get over it’. As simple as this sounds, nothing else can be achieved until this first step is overcome. Acceptance of such a major issue can take different forms and vary from person to person. Whatever method is used, progression cannot continue until you have acceptance. When I speak to parents who are still waiting for a miracle cure, I know that they have not yet accepted their situation.

Fortunately, our acceptance did not take long and we were able to make some good decisions in relation to Rhys.

Not least of all was our choice of school. At preschool Rhys displayed antisocial behaviour which placed an enormous strain on Rhys, his teachers, classmates and in particular, Shauna. Every time Shauna picked up Rhys from preschool, she was told of his antics during the day and often when I came home from work she was upset.

As with all parents, we endeavoured to give Rhys the best education we could. We decided to send Rhys to a specialist school and avoided the temptation of integration. After looking at a number of different schools, we made our choice and tried to get him enrolled. We assumed that with his diagnosis, and aggressive and anti-social behaviour, enrolling Rhys at the school of our choice would be a formality. This was not to be.

Rhys had to sit for an IQ test to assess his eligibility, and his IQ was one point over the threshold. Once again we were on the treadmill, chasing politicians, paediatricians and school principals in an effort to get him enrolled. Eventually, he was accepted; not on his diagnosis, but because of his antisocial behaviour and severe language disorder. We found this to be a good test for us. If you feel strongly about an issue, don’t just accept the decisions of the bureaucrats, take it as far as you can because if you don’t, no one else will.

Rhys is now ten years old, and has done extremely well at school. He is computer literate and loves spending hours at a time surfing the Internet. (Yet we are still dismayed by his compulsive behaviour and his need to delete icons and shortcuts from the desktop.) He also loves his football, but when he has had enough rather that put his football away, he kicks it over the fence next door to show he is finished.

For the past two years, Rhys and I have been able to share our love of football. These days he copes a little better with the big crowds, noise, flashing lights and the excitement of an AFL match at Colonial Stadium. We still have a few hiccups on match days, but in the main we both look forward to our ‘boy’s days’.

He loves his younger sister but when things don’t go his way he takes his frustration out on her, despite the knowledge of having to spend hours in his room as punishment. He takes medication to curb his compulsive behaviour but he still struggles at times to cope with his condition. We also struggle, but with the support of a great network of friends and service providers that we have built over the years, life seems a little easier.

We have had to overcome many challenges over the past ten years but we often take a reality check, knowing that other families are worse off than we are. As a father with a son who has a disability, I have found my role is continually changing. Initially, I saw myself trying to support Shauna in getting the best results for Rhys, but now I am able to share in the many benefits he brings to our family. I now realise that my dream of him being a great sporting hero was just that and that we are lucky to have what we have.

While I would be lying if I said I would not want Rhys to be ‘normal’, we would not swap him for the world. We love him dearly, and although he has presented us with many challenges, he has helped us grow in many ways. We are generally more accepting of many issues both great and small, and as his life continues to move forward, hopefully ours will too. Thanks Rhys, we’re enjoying the ride (most of the time).

This personal account was obtained from the Association for Children with a Disability: www.acd.org.au/information/dad_story_2.htm